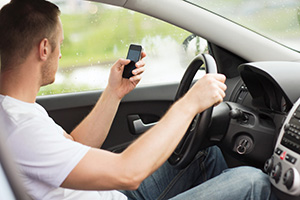 How often do you look at your cellphone while driving? Recent research shows that for the average person, it’s quite a lot.

A recent study[1] commissioned by AT&T shows that more than 60% of smartphone users keep their cellphone within close reach while driving, and seven in ten users engage with their smartphone while behind the wheel.

According to a recent study by the National Safety Council, more than a quarter of all car accidents are caused by cellphone use.

Additionally, nine percent of drivers are talking on a cellphone at any given time during daylight hours, and that distraction increases the likelihood of being involved in an accident by four times.

Any kind of distraction that takes your attention away from the road can be a deadly one, and drivers are now doing more than just talking on their cellphones while behind the wheel.

While there is limited research to show how much of an impact texting and social media can have on driving, it is clear that accidents caused by cellphone-related activity are on the rise.

If you have been injured because of a distracted driver, contact the law firm of Bailey & Oliver today for your free consultation.