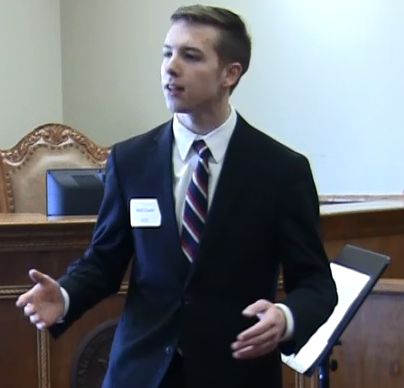 I’ve participated in the Bailey & Oliver Speech Contest for 3 years now, and I’m very grateful for such a unique opportunity available to high school students! The Speech Contests grow my knowledge about each topic by so much more than I would have expected, and they’re important subjects. This year’s topic was by far the one that required the most research of the three I’ve participated in. I entered the process with no recollection of the 7th amendment, and finished as a sort of mini-expert on the topic. In researching, I visited many websites and databases to try and get a full view of both sides of the issue. Some of these sites were attorneys’ websites, professors’ articles about the history of the amendment, politicians’ voting records, news articles advocating for one side or the other, and change activists’ sites. After exploring a full spectrum of ideas, I asked myself, “what do I agree with, and why does this matter to me?” I’ve found that, in terms of my own performance, the difference between a good speech and a bad one is the level of personal investment I have in the issue. I truly developed an internal passion for my stance, and I’m grateful for having the opportunity to do so. Here’s the speech:

Ah, you’re sitting down on a Saturday afternoon, feet kicked up, as you turn on the TV. You call out the harmless request, “Honey, will you get the mail?” only to be slapped in the face by a letter -- with your name on it. As you open it, you realize you’ve been summoned… to jury duty. “No, it’s been over 10 years. I can’t end my streak like this,” you think. But alas, you proceed to go and sit for hours, listening to banal voices, all during your daughter’s first day of school. It’s understandably easy to complain about jury duty, but like it or not, it’s a responsibility of you, an American citizen, that’s a direct effect of the 7th amendment.

But what IS this 7th amendment? The seventh amendment reads, “In Suits at common law, where the value in controversy shall exceed twenty dollars, the right of trial by jury shall be preserved, and no fact tried by a jury, shall be otherwise reexamined in any Court of the United States, than according to the rules of the common law. In other words, we have the right to a trial by jury -- a chance to have our case heard by more than one judge. We have a chance to connect with fellow citizens. But most importantly, it serves as a buffer between the people and the government -- a way to restrict official or arbitrary power and to protect the individual in a court case against political corruption.  While this right has only been guaranteed in the Federal Courts, it often extends to states because nearly every state has adopted this right into their own Constitutions. Why? Because this right is extremely important. In fact, Thomas Jefferson thought it was one of the most important parts of the Constitution and said that he considers “[trial by jury] as the only anchor ever yet imagined by man, by which a government can be held to the principles of its constitution.” Alexander Hamilton claimed that “"The civil jury is a valuable safeguard to liberty." Another founding father, James Madison stated that “trial by jury in civil cases is as essential to secure the liberty of the people as any one of the pre-existent rights of nature.”

But there’s a problem. Our seventh amendment is just as much under attack as many claim the 1st and 2nd amendments to be. But, if the founders thought it was so important, why are some working to weaken it? The arguments against the 7th amendment seem logical. Kevin Kennedy of Michigan State University College of Law argues that jurors often don’t understand the instructions given to them or the evidence, that juries can’t be trusted because of possible jury nullification where they claim the defendant is not guilty even when he is, simply because they don't think he should be punished. Another argument is that juries make decisions based on compromise rather than rational decision making. And jury trials cost too much, which is a burden to companies who face tons of these trials and have to pay. It’s inefficient. Based on these and other arguments, politicians and special interests have been attempting to weaken the system in recent years. One of these attempts is through a funny-sounding thing called “tort reform.” US Legal Dictionary says that this is where “laws are passed which place limits or caps on the type or amount of damages that may be awarded in personal injury lawsuits.” Placing caps on awards works in the government’s favor because discourages victims from pursuing a lawsuit -- and this undermines the fundamental purpose of a jury. Its juries who determine the amount of awards based on the case evidence and damage to a victim. When caps are applied, some cases never even reach the courtroom because the costs involved in pursuing the lawsuit are simply too high, according to Garcia-Ochoa Law. Additionally, some are lobbying for a victim who loses their case to pay all legal fees to a defendant.

Power is being moved from the people back to the hands of the government.  These movements that eat away at our liberty are meant to ensure practicality and efficiency. Unfortunately, that’s not how our government is supposed to work. Juries aren’t perfectly efficient in the same way Congress isn’t efficient. CNN points out that “In the end, a slow, restrained government is a more thoughtful, careful, and hopefully good, government,”... something the founders intended. Are there ways we should improve the system, and are there faults in juries? Sure. We can acknowledge that. But the overarching and fundamental principle we MUST focus on is the same one the founders did. We must prefer liberty over efficiency.

Liberty is exactly what the 7th amendment upholds. Its significance is rooted in the founding of this country: to protect the people from the corruption of the government. Contrary to some claims, juries are very rational -- cases are often very close because everything is being considered. Kevin C. Kennedy pointed out that “if the rate of disagreement was zero, then juries would be nothing more than window dressing. But the basic truth that makes this amendment important is that it is a fundamental right of citizens, listed in our Bill of Rights, and we can’t let that disappear.  It’s the key to preserving civil rights as a whole. As Alexander Hamilton put it, “The strongest argument in its favor (Le. requiring juries) is, that it is a security against corruption.”

There are so very few direct connections between the citizens and the government in our modern age. The right to a jury trial stands as one of those few ways in. And whether it be through advocating against tort reform, staying alert to attacks on the 7th amendment, or yes, even attending jury duty, we must preserve that right.