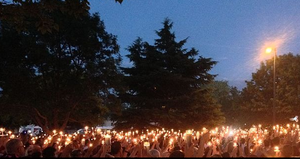 Speaking of suffering, it has happened again. Only this time it is the largest mass shooting in U.S. history on our soil. That is difficult to comprehend! Certainly the victims in Orlando, their families, and their community are in our thoughts and prayers. While I believe wholeheartedly that such a tragic incident is not the will of God for God's people, I know there are those who may disagree for different reasons. I, for one, do not believe that hate is a part of God's character. The act perpetrated on Sunday morning was truly an act of hate. My purpose today is not to delve deeply in such an argument as I believe it would be quite callous of me to do so. Today, the community of Orlando needs our love and support without turning their tragic situation into a point of debate about God's nature. Our prayers are with them today and all who are suffering with them. If I didn't learn anything else at all in seminary, I did learn one thing: when people are suffering it is not the time to carry on a theological conversation with them about suffering. It is important to be there for them in that very moment in whatever way we can.

I want to turn our attention to the story of Joseph found in Genesis beginning in chapter 37 that may shed some light on humanity's suffering. Joseph was a son of Jacob, one of twelve, not the youngest of his son's but the scripture tells us Joseph was Jacob's favorite. Jacob made Joseph a "coat of many colors" that was a symbol of the love he had for his son. Now Joseph didn't help matters by bragging to his brothers about the coat and how he had a dream they would all bow down to him, indeed how his whole family including his father and mother would worship him. No wonder the scripture tells us that his brothers hated him and were jealous of him. Maybe you can understand such a relationship between siblings.

They hated him so much the first opportunity they had him alone they staged his death by throwing him into a pit--even though one wanted to kill him--and selling him to a travelling group of Ishmaelites who took him to Egypt to sell him as a slave. His brothers soaked his beautiful coat in goat's blood and showed it to his father as proof he was killed by a wild animal. In slavery Joseph became a slave and through a series of events in which he was elevated to be in charge of much, lost it all by refusing to compromise his integrity, then regained it all and much more by interpreting some dreams of the Pharaoh.

At the time of famine and drought that gripped the country and region, Joseph was in charge of all the grain. When his family came seeking help, Joseph was in a position to help his family. The story is a fascinating read, and, of course, is the subject of an award winning Broadway musical. There are so many themes to consider in this story, but I lift it up today as a way to look at an aspect of suffering.

It doesn't necessarily answer the "Why?" question of suffering although some might say it does. When suffering occurs in our lives or the lives of others, it is easy to dismiss it as bad; however, scripture attests to the fact that through most suffering good can come. In this case the suffering that came upon Joseph at the hands of his brothers had a redemptive element to it. Yes, he was boisterous and braggadocio to his brothers, but I don't believe anyone would justify what was done to him by his brothers. While Joseph may have brought on some of the ire of his brothers, he did not deserve the treatment he was given. I find it interesting though that he ultimately was the one in charge of the Egyptian grain when the famine occurred in the land. Looking back over all that had happened even Joseph saw very clearly the redemptive power of his suffering which worked out for the good of his family. Joseph stated, "Even though you intended to do harm to me, God intended it for good, in order to preserve a numerous people, as he is doing today (Genesis 50: 20)."

Such redemption is almost impossible to see in the moment of suffering. Those who know scripture best may be able to have hope in a particular situation of suffering because they know the biblical witness of the providence of God. Such a faith would be rare. The providence of God is recognizing that God provides for us through all situations; however, it is hardly ever recognized in the present. It usually is only visible as one looks back over a given situation or maybe even their lifetime. I don't believe it is ever very wise to tell someone in the midst of their suffering that God is going to bring something good out of this situation. There will be a time for that witness; however, I think it is best to say something like "God is here with you in your suffering, and I am too." God is in the redemption business. I am convinced God can redeem any situation, but that does not necessarily take the pain away.

The truth is we learn the most about ourselves, about others and even about God in the midst of our suffering. That doesn't mean we desire it or wish it on others, but it does mean that even the suffering does not have to have the last word.

Next week I will take a look at suffering that definitely did not have the last word by looking at the life and teaching of Jesus as he discussed suffering and as he experienced it.

Persevere! Endure! Suffering will not have the last word!