The opioid epidemic is killing thousands of Americans.  Senator Claire McCaskill has taken the manufactures of these killer drugs to task.  Senator McCaskill is the most senior Democrat on the Senate’s Homeland Security and Governmental Affairs Committee.  This is clearly a homeland security issue of grave importance, killing more Americans than ISIS.

The first target of Senator McCaskill’s investigation is the drug maker Insys.  According to the Senator’s report www.mccaskill.senate.gov/opioid-investigation, you can listen to an audio recording in which an Insys sales representative misidentifies herself as being from the doctor’s office and uses language designed to circumvent the prior authorization process.

Insys manufactures an opioid drug, Subsys, which is a fentanyl spray.  Insys pushes the drug far beyond its approval for breakthrough, late-stage cancer pain.  A former Insys sales representative was told not to target physicians working with cancer patients, as they “would die soon anyway and couldn’t [increase their dosage].”

Senator McCaskill found, in addition to pushing the drug Subsys, through their sales reps, Insys has hosted lavish social outings for doctors on a routine basis.  One doctor was given “one of the best nights of his life,” and began writing nearly 6 times more Subsys prescriptions the very next week.  This doctor also received more than $250,000 in speaking fees from Insys. 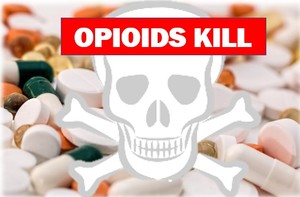 Opioid addiction is a national crisis.  Since 1999, more than 183,000 people have died from prescription opioid overdoses.  Opioid prescription sales nearly quadrupled between 1999 and 2014, despite no increase in the amount of pain Americans reported.

On July 17, 2017, Senator McCaskill joined her Senate colleagues to call on the Drug Enforcement Administration to prevent opioids from flooding the market by setting lower opioid production quotas for 2018.  Senator McCaskill recently requested that the Department of Justice conduct an internal investigation into the ability of the Drug Enforcement Administration to hold major drug distributors accountable for opioid diversion as new data indicates that more Americans die annually from opioid abuse than gun violence.

At Bailey and Oliver, we are concerned about the deaths caused by the overuse of opioid prescriptions and especially about newborn babies who are born addicted.  If you have questions about this national epidemic of opioid overuse, call us at 479-202-5200, or just drop by.  We are conveniently located at 3606 Southern Hills Boulevard, Suite 200, Rogers, Arkansas, 72758.