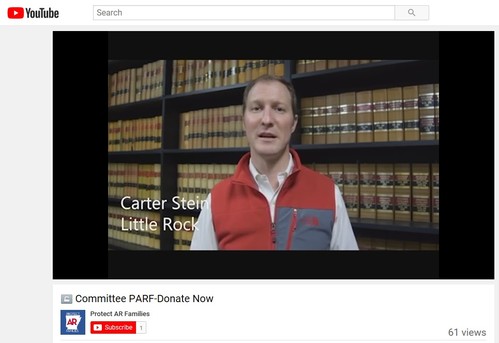 Arkansas Issue 1 will appear on the November 2018 General Election ballot.  Issue 1 is an attempt to change the Arkansas Constitution that guarantees your right to a jury trial with jurors unencumbered by arbitrary boundaries and limits.  If you agree juries should decide the outcomes of court cases, VOTE NO in November. Learn more about why you should vote NO in Nov. to Arkansas Issue 1.

The following is an excerpt from the Protect Arkansas Families website:   www.protectarfamilies.org

The state shouldn't be allowed to place an arbitrary value on human life, but that’s exactly what will be on the ballot in 2018.

The Truth About Issue 1

Issue 1 is an attempt to change the Arkansas Constitution that guarantees your right to a jury trial with jurors unencumbered by arbitrary boundaries and limits.

This initiative's artificial limit on the value of human life would apply to every Arkansan, regardless of age or occupation. It is immoral and unconstitutional.

It is an attempt by big government and special interests to take away an inherent right of the citizens of this state to determine for themselves what value human life has. This ballot measure is an effort to destroy the right to trial by a jury unencumbered by arbitrary restrictions as guaranteed by the Arkansas State Constitution.

This amendment would limit the amount of money awarded in lawsuits for personal injury or wrongful death to a maximum of five hundred thousand dollars ($500,000), regardless of the negligence or wrongful acts involved. It is immoral and unethical to designate an arbitrary dollar value for human life or human potential. This measure was referred to the ballot by a vote of the state legislature, “Senate Joint Resolution 8” and will appear on the November 2018 General Election ballot.

1.This is a government overreach that takes the power away from a citizens jury and tilts the scales in favor of big government and state politicians. People on juries should decide the outcomes of court cases, not politicians and Little Rock insiders.

We must protect citizen-juries and their power to make decisions. People on juries – Arkansas citizens – should decide the outcomes of court cases, not arbitrary guidelines.

The Seventh Amendment to the U.S. Constitution: “In suits at common law, where the value in controversy shall exceed twenty dollars ($20.00), the right of trial by jury shall be preserved, and no fact tried by a jury, shall be otherwise reexamined in any court of the United States, than according to the rules of the common law.” This proposed Arkansas amendment would set aside three centuries of American jurisprudence.

An Arbitrary Value On Life

This amendment places a cost on a human life at $500,000, regardless of the person, the situation, or how negligent someone was in a wrongful death. It is immoral to assign a specific dollar value to a human life in the law, and this is a slippery slope on issues about the sanctity and dignity of life.

Each life is valuable in God’s eyes; we as human beings in court are trying to determine a value to provide justice for those who have done the wrong and monetary mercy for the victims and their families who have suffered the wrong.  No arbitrary rule can apply.

Before we start placing caps on jury awards, we should make sure that there is a system in place that holds doctors and hospitals responsible for their errors when they injure or kill someone.

Why should we amend our state constitution to erode personal responsibility? Why should the burden be shifted from the wrongdoer to the victim or to the taxpayers if someone is negligently injured in a debilitating way?

Protect Our State Constitution & Our Rights

The Declaration of Rights of the State of Arkansas would be amended by this ballot measure to undermine one of the most fundamental rights our state has always guaranteed its clients – right to trial by a jury unencumbered by arbitrary conditions or limits. Don’t let anyone fool you, this will erase your constitutional rights.

Specifically, Article 2 Section 7 states "The right of trial by jury shall remain inviolate, and shall extend to all cases at law, without regard to the amount in controversy..." Don’t let anyone fool you.  This amendment violates that right, “inviolate” means "consecrated, free from impairment." To claim SJR8 does not “impair" the right to trial by jury is nonsense.

Article 5 Section 32 states that, "Provided, that otherwise no law shall be enacted limiting the amount to be recovered for injuries resulting in death or for injuries to persons or property; and in case of death from such injuries the right of action shall survive, ..." SJR8 clearly violates the provisions of this Article and Section.