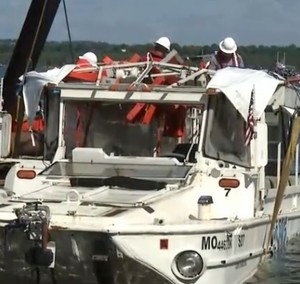 Photo shows capsized boat as it is being raised from the lake by Coast Guard.  Life Jackets can be seen hanging from the canopy.

As more and more information develops about last week’s preventable drownings on Table Rock Lake, I become more and more disgusted about the disregard for safety, Ripley Entertainment, Inc. has shown.  First, we learn the passengers were told they did not need life jackets.  Then, we learn from the National Weather Service the storm had been predicted for two hours before the boats left the dock.  Next, we hear that the safety inspector last year warned about the exhaust pointing toward the front of the duck boats and water getting in the engine during rough weather.

This is a clear example of three safety violations that could have saved lives if they had not been ignored.  Sources list at least fourteen attractions that Ripley Entertainment Inc. owns and operates including Ride the Ducks.  This was not a mom and pop operation.  Ripley Entertainment Inc. is an entertainment and edutainment holding company owned by the Jim Pattison Group of Vancouver, British Columbia, Canada.  The company has headquarters in Orange County, Florida, near Orlando.  It began operation in 1918 and today operates over 90 attractions under a dozen brands worldwide.  Their attractions boast of over 100 million visitors since 1933.

Surely, they have a safety director with safety policies.  What caused Ripley Entertainment, Inc. to ignore these obvious safety precautions that would have saved lives?