This is a repost of an Arkansas Democrat-Gazette by Mike Jones, January 17, 2019.  (Photo's property of the AR Dem.-Gaz.) 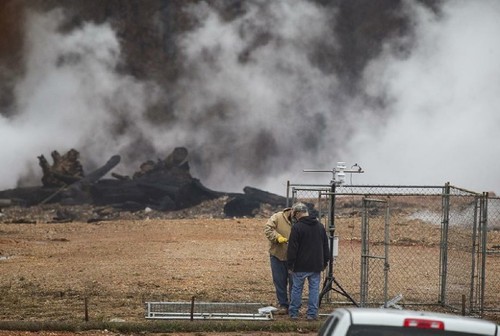 Staff members with the Arkansas Department of Environmental Quality install a meteorological station to record wind speed and direction Thursday at the former stump dump site that is burning underground in Bella Vista. - Photo by Ben Goff.

BELLA VISTA -- The cost to extinguish an underground fire at an old stump dump on Trafalgar Road in Bella Vista could be millions more than first estimated, Gov. Asa Hutchinson said Thursday.

"We have a fund at ADEQ to help us in these kind of remediation efforts," he said at the Arkansas Municipal League meeting in Little Rock. "It has about $8 million in it." Hutchinson said he was told that the project might be in that price range.

The Arkansas Department of Environmental Quality said in a news release later Thursday that it had received a draft response action plan from EnSafe, the Memphis company hired by the state to help put out the fire.

"I have received the initial report from ADEQ that includes cost estimates for the Trafalgar Road fire cleanup. The $21 [million] to $37 million estimates for excavation are stunning and much higher than the initial estimates of $5 [million] to $10 million. I have directed ADEQ and EnSafe to explore more cost effective alternatives," Hutchinson said in the news release.

"Additionally, we continue to vigorously pursue assistance from the United States Environmental Protection Agency, which will be necessary as we move forward with this project. In the meantime, ADEQ and the Arkansas Forestry Commission will immediately begin work to prepare the site for cleanup," Hutchinson said in the release. 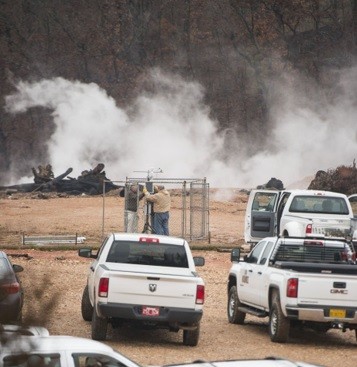 Arkansas Department of Environmental Quality staff install a meteorological station to record wind speed and direction Thursday at the former stump dump site on Trafalgar Road in Bella Vista. The department also installed two temporary ambient particulate matter monitoring stations. Shaun Kitchens, a chemist with the department, said the particulate monitors are the same as those set up at about a dozen permanent sites around the state.

"I knew it was going to be expensive," Christie said of the project. "It's a very complicated situation."

Hutchinson pledged close to $1 million on Dec. 28 to start the process to put out the fire.

EnSafe's draft plan comes after on-site inspections, analysis of available data on the site, and consultation with fire suppression experts. The draft plan provides seven alternatives with related costs and risks -- ranging from smoke mitigation and fire management to complete excavation and fire extinction, according to the release.

Becky Keogh, director of the Environmental Quality Department, stated in the release that agency staff members and officials with the Forestry Commission were at the site Thursday to start work on a firebreak.

The estimated cost for the preparation work is between $1 million and $1.3 million. The work will be performed by EnSafe, the Department of Environmental Quality, and the Forestry Commission in coordination with local officials.

Preparation will include clearing trees and other vegetation for a staging area around the fire site, a 15-foot fire break, an access road and an exploratory trench. The estimated time frame for the work to be completed is six to 12 weeks, according to the release.

"This is a challenge for all of us," Hutchinson told the Municipal League. "It's not just what's foreseen, but sometimes what's unforeseen that comes into our lap."

Hutchinson said the EPA has been unable to help because of the partial federal government shutdown.

Firefighters were initially dispatched to the fire area July 29, where they spotted smoke and what appeared to be the remains of a brush fire, Bella Vista Fire Chief Steve Sims has previously said. Fire Department personnel have said the fire may be burning more than 50 or 60 feet underground. 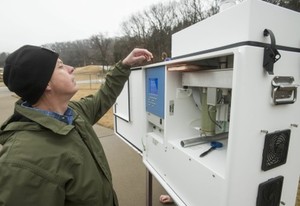 Jim Best with Arkansas’ Department of Environmental Quality installs an air quality monitoring station Thursday at the Bella Vista Property Owners Association’s Harmon Booster Station near Cooper Elementary School. The stations are part of the department’s efforts to assess the public health and environmental impact of the underground fire at the former stump dump site.

Tom Judson, the Bella Vista Property Owners Association's chief operating officer, said the association leased the land and used it as a dump site for lawn and wood debris from December 2003 until the end of 2016 when the dump was covered with soil.

Nobody monitored the site in the last few years it was open, but staff members would remove trash when possible, Judson said. The stump-dump operation was closed Dec. 31, 2016, according to Bella Vista's website. The property is now owned by Brown's Tree Care.

Monitors will record particulate matter levels on a 24-hour cycle. The department will collect and analyze the data and release findings to the public, according to the release.

Particulate matter monitoring measures the amount of solid and liquid droplets in the air of such things as ash, dust and smoke. The amount provides a snapshot of local air quality and the possible affect on people's health, according to a news release from the Arkansas Department of Health.

Donnally Davis, with Environmental Quality Department, said the monitors will remain until the fire is extinguished.

Preliminary results of monitoring near the fire showed the air quality in the "unhealthy" category, according to a news release issued Dec. 12 from the Health Department. Everyone within a half-mile radius of the 8000 block of Trafalgar Road was cautioned to avoid prolonged or heavy exertion outdoors.

The EPA performed air monitoring at the site on Oct. 2 and 3, Nov. 9 and 10, and Dec. 10-13, Davis said in an email Tuesday. The EPA collected 24-hour air samples from five locations around the site, she said.

No air quality testing has been done since Dec. 13, Davis said.

Information for this article was contributed by Hunter Field of the Arkansas Democrat-Gazette.