(CNN)The crane collapsed with such force, it crushed a Dallas apartment building like it was a cardboard box.

One woman, 29-year-old Kiersten Smith, was killed. Others have lost their homes.  But the tragic accident during a storm Sunday didn't have to happen, a crane safety expert said.  "The reason I say that is there was nobody on the job," said Thomas Barth, a former federal crane accident investigator.
"It happened on a weekend. Why didn't anybody check the weather for the weekend, knowing that this storm was coming in? Why didn't they prepare the crane?" 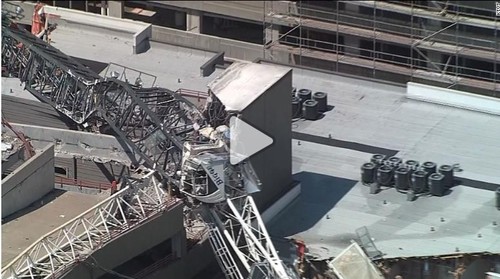 'This crane should not have gone over backwards'

About three hours before the crane collapsed, the National Weather Service issued a severe thunderstorm watch for the Dallas area.

Crane collapse witness: There was nothing but debris.

Sunday's highest reported wind gust at Dallas Love Field Airport was 71 mph, although wind speeds were likely higher aloft.  But cranes should be able to handle winds almost twice as strong, Barth said.  "High winds blew it over backwards, and these cranes are able to withstand winds up to 140 mph," he said.  "Was it installed properly? These are things (that) will come out later in the investigation of why it happened. This crane should not have gone over backwards."  The crane company, Bigge Crane and Rigging Co., said it is also seeking answers and is cooperating with investigators.  "Our thoughts and prayers are with the families of those who were killed and injured, and to those that suffered property damage," the company said. "We are mobilizing personnel to the site to find out more and, of course, to fully cooperate with investigating authorities.  Two of five people injured in the collapse have been released from the hospital, Dallas Fire-Rescue said.

What could have been done

Barth said crane companies can prevent catastrophes during a storm without having to dismantle the entire crane.  "One of the things I would suggest -- and a lot of people do it -- is they tie a heavy weight on the crane (so) the boom can't go over backwards or anything like that," he said. 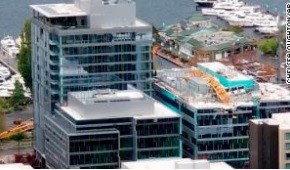 Gusty winds and human error could be factors in deadly Seattle crane accident, experts say
So why doesn't that always happen? In his experience investigating previous accidents, Barth said it often comes down to money or inexperience.  "The industry has grown so fast for cranes, a lot of people are doing things that are pushed into these positions without the proper training," he said.  Sunday's tragedy marked the ninth crane accident death in North Texas since 2012, CNN affiliate KTVTreported. From 2011 to 2015, Texas had about four times more crane-related deaths than any other state.  But recent fatal crane accidents have happened across the country.  In April, workers were trying to dismantle a crane in Seattle when the mast collapsed, killing two workers and two bystanders. In 2016, a 565-foot crane collapsed during morning rush hour in New York City, killing one person.

'It just sliced through the building'

Abbey Kearney, who lives in the Dallas apartment complex, said the disaster happened quickly.  "It was like a sunny, beautiful day and people were at the pool," she said. "And then it just got dark very quickly, and the wind picked up something fierce. It got dark, and it was over in a matter of seconds." 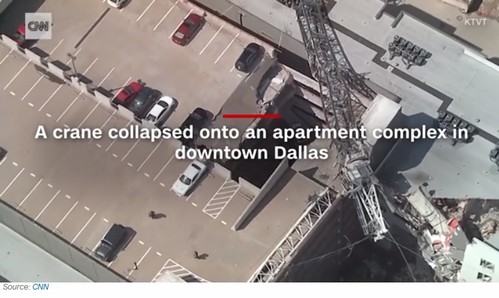 She saw three umbrellas shoot straight up into the air. All the pool furniture flew into the pool.  Then she saw the crane plummet.  "It just sliced through the building ... like a hot knife through butter," Kearney said. "It went from the fifth floor to, from what I can tell, the third floor."  Concrete floors of the parking garage ripped like paper. Rows of vehicles fell several stories below and lay heaped in a mangled mess.  "There were cars that were vertical," Kearney said.  As investigators work the scene Monday, some residents still have no idea whether their apartments are still intact.  "We don't know how much -- if any -- damage was done to our apartment," said Sammy Sandquist, who lives with her fiancé. "We have no idea how much damage was done to one of our vehicles. It's in there. It was on the top floor ... We don't know if it's at the bottom of the pile."  Officials said residents will be allowed to go into their apartments to retrieve belongings.
Sandquist said she's frustrated knowing there may have been ways to avert the tragedy.  "It just really breaks your heart," she said. "You want to just wish you could go back in time and make sure that none of this ever happened in the first place."

Link to CNN for video details of the crane falling: https://www.cnn.com/2019/06/10/us/dallas-crane-collapse/index.html