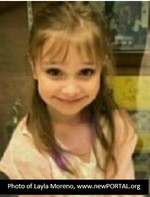 On a dry, sunny afternoon on May 16, 2017 around 3:40 pm in Riddle, Oregon, Layla Moreno and her brother Dominic Moreno were in the backseat of their father Franco Moreno’s car traveling southbound on Pruner Road heading home from school.  While traveling down the road, without warning, the driver of a log truck pulled out in front of their car causing a T-bone collision. All three family members were severely injured but Layla’s 6-year-old head snapped with such force from the crash, she was internally decapitated.

Layla, in a coma with life-threatening injuries, was life flighted to Oregon Health & Science University Hospital. Dominic and Franco following by ambulance. Along with her internal decapitation, among other injuries, Layla had a large facial laceration, a brain bleed, and a lung bruise.  For 11 days, Layla remained in intensive care fighting for her life. 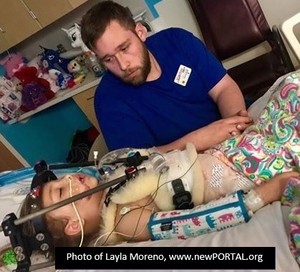 With the concrete barriers placed by C & D Lumber Company blocking his view, driver Walter Oesterreich sped up, ran the stop sign on Boyer Road, and turned his log truck left on to Pruner Road, directly into the path of Layla, Dominic and Franco Moreno’s 1999 Nissan Maxima.  The log truck was owned by Gene Whitaker, Inc, (Whitaker Leasing, LLC)

In the late evening hours after the crash, the concrete barriers on the C & D Lumber property along Boyer and Pruner Roads, were moved eight feet back from their previous location. This altered the evidence at the crash scene, causing it to appear that the barriers would not block the view of vehicles or log trucks entering the intersection of Pruner Road and Boyer road.

With her life-threatening injuries, there is a long road of recovery for Layla. Following the crash, until August 17, 2017, she wore a halo to stabilize her neck.  She has already gone through months of inpatient rehabilitation and therapy and will endure years of outpatient treatment.  Layla was 6 years old at the time of the crash. . . .

Her life is forever changed.

You probably know the meaning of the word decapitation.  But, do you know the meaning of an “internal decapitation” (atlanto-occapital dislocation)? In layman’s terms, ligaments that attach your skull to your spine are severed.  When this happens, a head might move around more than it should.  This movement can lead to damage in the lower brain stem, a vital area that controls breathing.  Most people with an internal decapitation do not live.  A 2005 study of internal-decapitation injuries at a hospital in Philadelphia found that, over a 17-year period, 16 children with the injury were seen at the hospital, and only five of those children (31 percent) survived.