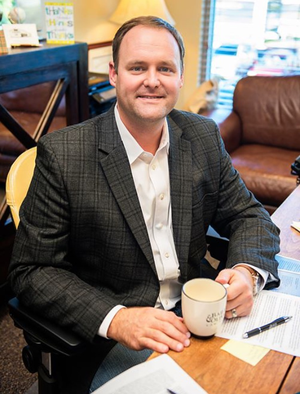 Sach Oliver was born in Salem, Ark., and attended school in nearby Viola. The area is situated about 35 miles from Mountain Home. Sach says, “It was a wonderful place to grow up. All my family still lives there and that family background is a big part of who I am now.” Sach is now a successful partner in the Bailey & Oliver Law Firm in Rogers. But he is much more than an attorney. He is a champion for giving back and doing good within his community.

Sach describes his childhood as setting a solid foundation for his life and says, “My mother, Jeanie, is outstanding. She dedicated her life to me and my brother, Jake. She was a schoolteacher and over the gifted and talented program in Viola, where we went to school. She donated so much of her time to helping with extracurricular activities like pee-wee basketball, quiz bowl and chess club – all things that she had me participating in.”

His father, Eddy, set the same type of hardworking example for Sach. “My dad is a line foreman for electric lines. He is an old-fashioned worker,” he explains. “I was raised on a cattle farm. My father worked long, hard hours, which my brother and I were taught early on. We got up on Saturday mornings and built fence and had to feed the cows every morning before school. Every snow storm or ice storm, my dad wasn’t home because he was out trying to get the power back on for people all over the country, which gave me a lot of responsibility as a young boy.”

While he was growing up in small town Salem, and getting a lot of hard work on the side, Sach says his parents were focused on working on his skill set. “I wanted to be a foreman like my daddy. In the summertime, I always wanted to work at the electric cooperative but my dad wouldn’t let me. He wanted me to go to college. My parents became invested in me doing public speaking very early. They had me singing in church and memorizing poetry to recite in front of the class, and I’ll have to say, it really paid off.”

When his last year of college was coming to a close, he began to think about the course his life would take after college. It brought to light a very important mentor that Sach had known his entire life. “Bob Graddy was a friend of my dad’s. We always called him Uncle Bob, even though he was no relation. He really took up a lot of time with me. He owned the local lumberyard in Salem. The entire community looked up to Uncle Bob. When I graduated from ASU, I was the Wilson Award Winner, and got the opportunity to speak at graduation. The local newspaper happened to interview Uncle Bob about my winning the award. His quote was, ‘Sach is like an Airedale Terrier, he’s a lot smarter than he looks!’”

Sach says he will definitely never forget that quote, but one that Uncle Bob said to him often while he was growing up was also remembered. “He told me all the time, ‘The best investment in life is…’ and he would pause for effect and then finish with, ‘people. And I’m investing in you.’ I think I always knew in the back of my mind that whatever I did with my education was going to be equal to an investment in people.”

But that didn’t quite yet equate to being an attorney. So Sach sought out further guidance from his chancellor and advisors at ASU. He eventually spoke with a man who the chancellor regarded as a visionary, Wallace Fowler. Sach says, “He started asking questions like, ‘What are you passionate about? What are your true skills?’ I responded with public speaking, and he said that maybe I should put trial lawyer in my option box. I started talking to people about it and that’s when I decided to go to law school.” So he began research on trial lawyers in the area around his hometown.

He found Frank Bailey in that research. “I was scared to death about law school. I didn’t know anything,” he says. “I called Frank Bailey’s office and wanted to go to work for him that summer between my senior year and law school.” His first few attempts were met with no success, but after persistence and a change of request (he ended up asking for just five minutes with Mr. Bailey), he was finally given a summer job to do small things around the firm. But he told Mr. Bailey, “I just want you to take me with you wherever you go.” Sach laughs as he recalls, “And he’s been taking me with him wherever he goes for the last 12 years!”

Soon after Sach graduated from the University of Arkansas School of Law in Fayetteville, an office with the name of Frank H. Bailey Law was opened in Bentonville. Sach worked there, and a short while after that, the office became Bailey & Oliver Law Firm. In the meantime, he had reconnected with a classmate from ASU named Codi. She was a good friend through college, but someone he had always held in the back of his mind as the type of person he would like to marry. Although he was ready to marry her before their first date, Codi decided to take things a little more traditionally and they were married in August 2006.

Codi works as an occupational therapist using hippotherapy (the use of horseback riding as a therapeutic or rehabilitative treatment) through an organization called hOofin’ iT, supported by the Bailey & Oliver Kids Foundation. Sach and Codi have two girls, 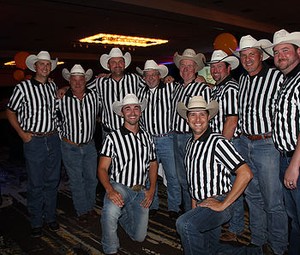 As if being a successful attorney, husband and father is not enough, Sach has yet another role within the community of Northwest Arkansas. It all began when he agreed to be the auctioneer for the fundraiser Gentleman of Distinction several years ago. He explains, “Dick Trammel couldn’t be there. So I agreed to help out. I knew nothing about auctioning. So I searched it up on You Tube and tried to mimic it. After that, Circle of Life Hospice asked me to be its auctioneer. It just started to snowball. At one point I realized that it was such a big deal. I was being asked to help raise money for people who really needed it and I didn’t know what I was doing.”

Sach made the decision in 2011 to attend the Texas Auction Academy. He spent two weeks learning all the skills he needed to raise as much money as possible from charity auctions. And then he began to assemble a team of helpers. The auction team members come from a variety of backgrounds. The team currently includes a dentist, a high school principal, a radio station vice president, a real estate agent, an animal health sales representative and two attorneys. The team is known for showing up in their cowboy attire. They have become known as the “cowboy auction team.”

Sach’s daughters have even begun to get in on the action as well. Sach says he hopes to have Reesa attend the Texas Auction Academy as soon as she is old enough. “I am humbled and impressed by the nonprofits here,” he says. “We help out at large and small events and it’s so nice to see the impact that both have.” Sach was honored last month at the National Philanthropy Day event for his contributions to the community. He and his team have helped raise more than $1.6 million for nonprofit organizations in Northwest Arkansas.

With the holiday season in full swing, it is always nice to hear stories of people like SacSach Oliver – people who truly invest in other people, people who invest in their community. There is no doubt Sach’s mentors did an excellent job of instilling that in him, and he and his wife Codi are doing the same for their children. Hopefully everyone can take something from his story. As Uncle Bob said, “The best investment in life is… people.”

10 Things to Know About Sach

1. The proudest moment of my life has been marrying my wife and best friend, Codi. She is the best thing that ever happened to me. And, of course, Reesa and Reagan, I am proud of our girls!

2. The modern convenience I would most like to do without is the smart phone. I like the days of home phones, leaving messages and returning calls when appropriate.

3. My most valued material possessions are our horses, Chuckles, Dolly, Bailey and Forrest.

5. On my nightstand I keep my Bible, The Natural, a western by Dusty Richards, The Story: Getting to the Heart of God’s Story, TED Talks: The Official TED Guide to Public Speaking, Halftime by Bob Bufford, American Angus Journal, an alarm clock and a picture of Reesa (my daughter when she was 4).

6. When it’s time to unwind, I take a horse on a long trail ride. We love Hobbs State Park in Rogers, the Ponderosa in Pineville, and just riding through our cattle on the farm.

7. People would be surprised to know I’m very nervous and even a little scared before I stand up in front of a crowd. Before each auction, I have to calm my nerves. Before each speech for clients, I pray the right words come out of my mouth. I would say that nervousness and fear is what drives me to be so prepared. We just want to get it right, the best we can.

8. My trademark saying and philosophy is, “Set goals – execute goals.”

9. There are things I miss about living in a really small town. When I think of growing up in Viola, I miss breakfast every morning with my Mom and Dad, passing my Grandpa on his dirt-road morning walks heading out for the day, dinner with Neenah (my grandmother) in the evenings (chicken and dumplings!), and in small towns, things just slow down and allow for more appreciation of the special things in life.

Thank you to Glenda Graves and Northwest Arkansas CitiScapes Magazine for the wonderful Profile article about Bailey & Oliver partner and co-founder, Sach Oliver.  (Thanks also to Kerri McMahon for the great photos!)