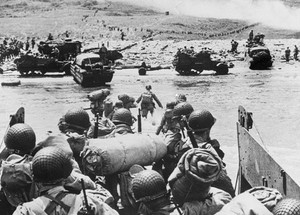 June 6th 1944 allied forces landed on the beaches of Normandy. One of the heroes that day was Chesterfield Smith.  Despite his gunshot wounds, Smith demonstrated incredible valor in personally dismantling enemy machine-gun emplacements.  Without Smith’s courage, the machine-guns could have killed and wounded hundreds of soldiers as the invasion of Normandy began.

After the war, Chesterfield Smith went to law school and exhibited equivalent valor as the President of the American Bar Association during the Watergate era.  Smith’s manifesto:  “No man is above the law,” appeared on the front page of The New York Times following the Saturday Night Massacre of October 20, 1973.

As lawyers, we are all charged with displaying our own brand of heroism.  We hold the future of our clients in our hands every time we accept a case.  I often think of the words of Ralph Waldo Emerson:  “The purpose of life is not to be happy.  It is to be useful, to be honorable, to be compassionate, and to have it make some difference that you have lived and lived well.”

This is the code that we as lawyers must live by.

(The Saturday Night Massacre of October 20, 1973 was the term used by political commentators to refer to Pres. Richard Nixon's dismissal of independent special prosecutor Archibald Cox, and the resignations of Attorney General Elliot Richardson and Deputy Attorney General William Ruckelshau on Oct. 20 1973, during the Watergate scandal.)