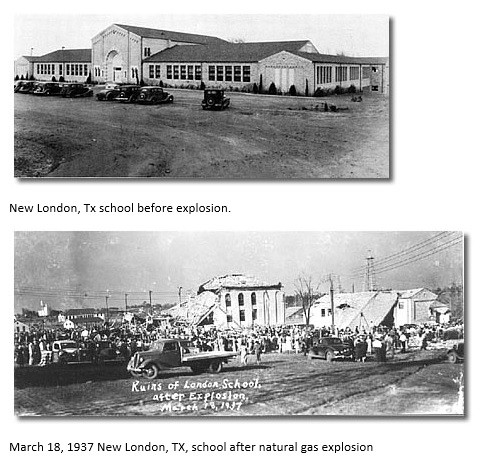 Rotten eggs, smelly socks or maybe rotting cabbages;  these are how some people describe the smell of natural gas.  Because natural gas is colorless and odorless,  a pungent-smelling gas called mercaptan, or methanethiol, is added to natural gas so that it can be detected.  Mercaptan can be detected by most people in extremely small quantities.  This makes Mercaptan an ideal additive to naturally odorless gasses like natural gas.

Natural gas has been available for use in the United States since around 1785.  Natural gas produced from coal was used to light streetlights and houses.  In 1816, a manufactured natural gas was brought to the United States and was first used in Baltimore, Maryland to light streetlamps.  The use of natural gas has been recorded as far back as about 1000 B.C. in ancient Greece.  But around 500 B.C., the Chinese started using “pipelines” crudely made from bamboo, to transport gas that seeped to the surface.  They would use the natural gas to produce a fire and boil sea water to make it drinkable.

Lifesaving change created as the result of a natural gas explosion.

Thursday, March 18th, 1937, a devastating disaster killed almost 300 of the 500 students and 40 teachers at the London School in New London, Texas.  There was no odor to natural gas in 1937 so when a faulty pipe connection caused gas to leak and build up in a closed space beneath the school building, a tragedy was imminent.

Built in an East Texas Oilfield, the new concrete and steel school was built in one of the wealthiest districts in the country.  At 3:17 pm, only 13 minutes from dismissing classes for the day, an “instructor of manual training” turned on and electric sander.  It was assumed that a spark from the sander’s switch ignited the odorless gas-air mixture resulting in a horrific explosion.  Witnesses testified, bodies were tossed 75 feet in the air and sitting 200 feet away from the school, an automobile was crushed under a two-ton slab of concrete that was hurled from the building.  Eyewitnesses stated the walls of the school bulged and the roof lifted in the air and then crashed back down causing the building to collapse, burying victims.  While the terrific force of the explosion was instant, it was determined that the point of origin for the blast had to break through an 8-inch concrete floor slab before achieving its ultimate pathway of destruction.

A Texas law enacted in 1937 mandating that a malodorant be added to all natural  gas for commercial and industrial use was a direct result of the school disaster in New London.   Following Texas’ lead, subsequent states enacted rules that required an odorant be added to natural gas.  Later in 1937, federal requirements for natural gas to have odorants added were made law.  Today’s industry standard of adding Mercaptan, the rotten egg smell, to natural gas is a direct result of the London School explosion.

While accidents caused by natural gas leaks in homes are relatively rare, when they do occur they can be devastating.  If you or a loved one has been injured by a gas leak call us, (479) 202-5200.  The attorneys at Bailey & Oliver Law Firm can help.  We have experience in natural gas explosions.

What are the Natural Gas Odorization Regulations?  Mercaptan Site:  https://naturalgasodorization.com/192-625-odorant-safety-regulations/